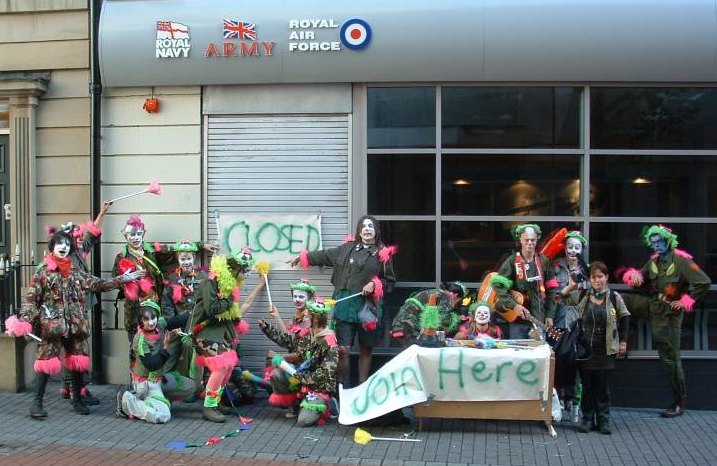 “We can’t start perfectly and beautifully. Don’t be afraid of being a fool; start as a fool.” — Chogyam Trungpa Rimpoche

Roll up, roll up – ladies and gentlemen, boys and girls, friends and foes – welcome to the unparalleled, the unexpected, the perfectly paradoxical, the grotesquely beautiful, the new-fangled world of the Clandestine Insurgent Rebel Clown Army (CIRCA).

We are clandestine because we refuse the spectacle of celebrity and we are everyone. Because without real names, faces or noses, we show that our words, dreams, and desires are more important than our biographies. Because we reject the society of surveillance that watches, controls, spies upon, records and checks our every move. Because by hiding our identity we recover the power of our acts. Because with greasepaint we give resistance a funny face and become visible once again.

We are insurgent because we have risen up from nowhere and are everywhere. Because ideas can be ignored but not suppressed and an insurrection of the imagination is irresistible. Because whenever we fall over we rise up again and again and again, knowing that nothing is lost for history, that nothing is final. Because history doesn’t move in straight lines but surges like water, sometimes swirling, sometimes dripping, flowing, flooding – always unknowable, unexpected, uncertain. Because the key to insurgency is brilliant improvisation, not perfect blueprints.

We are rebels because we love life and happiness more than ‘revolution’. Because no revolution is ever complete and rebellions continues forever. Because we will dismantle the ghost-machine of abstraction with means that are indistinguishable from ends. Because we don’t want to change ‘the’ world, but ‘our’ world. Because we will always desert and disobey those who abuse and accumulate power. Because rebels transform everything – the way they live, create, love, eat, laugh, play, learn, trade, listen, think and most of all the way they rebel.

We are clowns because what else can one be in such a stupid world. Because inside everyone is a lawless clown trying to escape. Because nothing undermines authority like holding it up to ridicule. Because since the beginning of time tricksters have embraced life’s contradictions, creating coherence through confusion. Because fools are both fearsome and innocent, wise and stupid, entertainers and dissenters, healers and laughing stocks, scapegoats and subversives. Because buffoons always succeed in failing, always say yes, always hope and always feel things deeply. Because a clown can survive everything and get away with anything.

We are an army because we live on a planet in permanent war – a war of money against life, of profit against dignity, of progress against the future. Because a war that gorges itself on death and blood and shits money and toxins, deserves an obscene body of deviant soldiers. Because only an army can declare absurd war on absurd war. Because combat requires solidarity, discipline and commitment. Because alone clowns are pathetic figures, but in groups and gaggles, brigades and battalions, they are extremely dangerous. We are an army because we are angry and where bombs fail we might succeed with mocking laughter. And laughter needs an echo.

We are circa because we are approximate and ambivalent, neither here nor there, but in the most powerful of all places, the place in-between order and chaos.