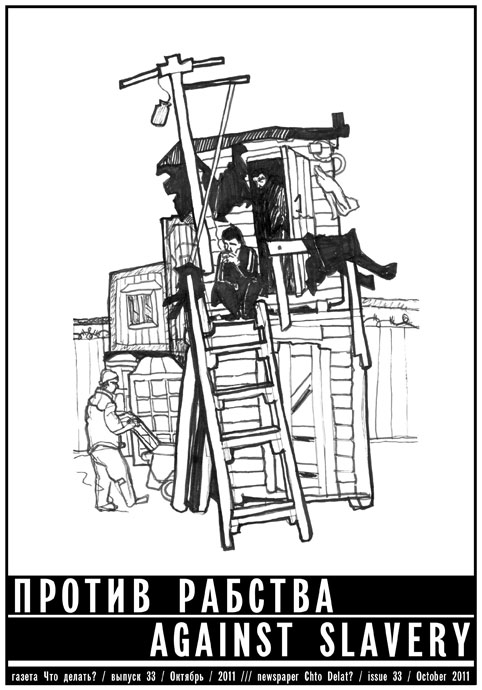 This issue of Chto Delat deals with migrant labor, an issue today at the center of not only Russian, but also world politics. Although our world has always been “globalized,” the numbers of people migrating in order to better their existence, whether economically or otherwise, are unprecedented. Discussion of this issue is complicated by the fact that we immediately find ourselves on slippery terrain occupied by the shadowy figure of the immigrant, who like the Wandering Jew in its time has come to function as a synonym for danger, contamination and the alien per se. Racists and nationalists of all stripes and lands rally round (so to speak) this fictional villain as they defend the supposedly homely but no less fictional spaces of nation, race and tribe from invasion by aliens. Judging by recent election results in certain “liberal democratic” European countries and legislative innovations in US states such as Arizona and Georgia, the “commonsensical” and “down-to-earth” slogans and prescriptions of the tribalists really are sometimes capable of generating a “groundswell” of “grassroots support.”

Some people have always found it hard to share their homelands, hometowns and neighborhoods with different languages, skin colors, and ways of understanding world, self and community. However, it is all too easy to accuse “the common folk” of being the source and support of xenophobic sentiments. As British sociologist Paul Gilroy has argued, when left to their own devices the “working classes” and “common folk” (whatever their “primary” tribal allegiances) are just as often capable of creating a “convivial” existence together, a life where each person’s allegedly essential difference informs and shapes a totally unexpected common good, a new commons. In reality, it is more often the liberal (or, now, neoliberal) talking and ruling classes, whose experience both with conviviality and the (non)realities of ethnic difference is frequently limited to a fondness for certain cuisines and holidaymaking in the global south, who shape the xenophobic and nationalist agenda via the media they produce and control, via the obscurantist norms and repressive laws they promulgate in the public space. It is this “common sense” from above that is the main instrument for stigmatizing and excluding people who sometimes lack the right language to tell us both about their plights and their joys, who frequently lack the right papers to exercise their individual civil rights and their collective right to struggle for a better lot in life.